INDO KORDSA IN THE NEWS 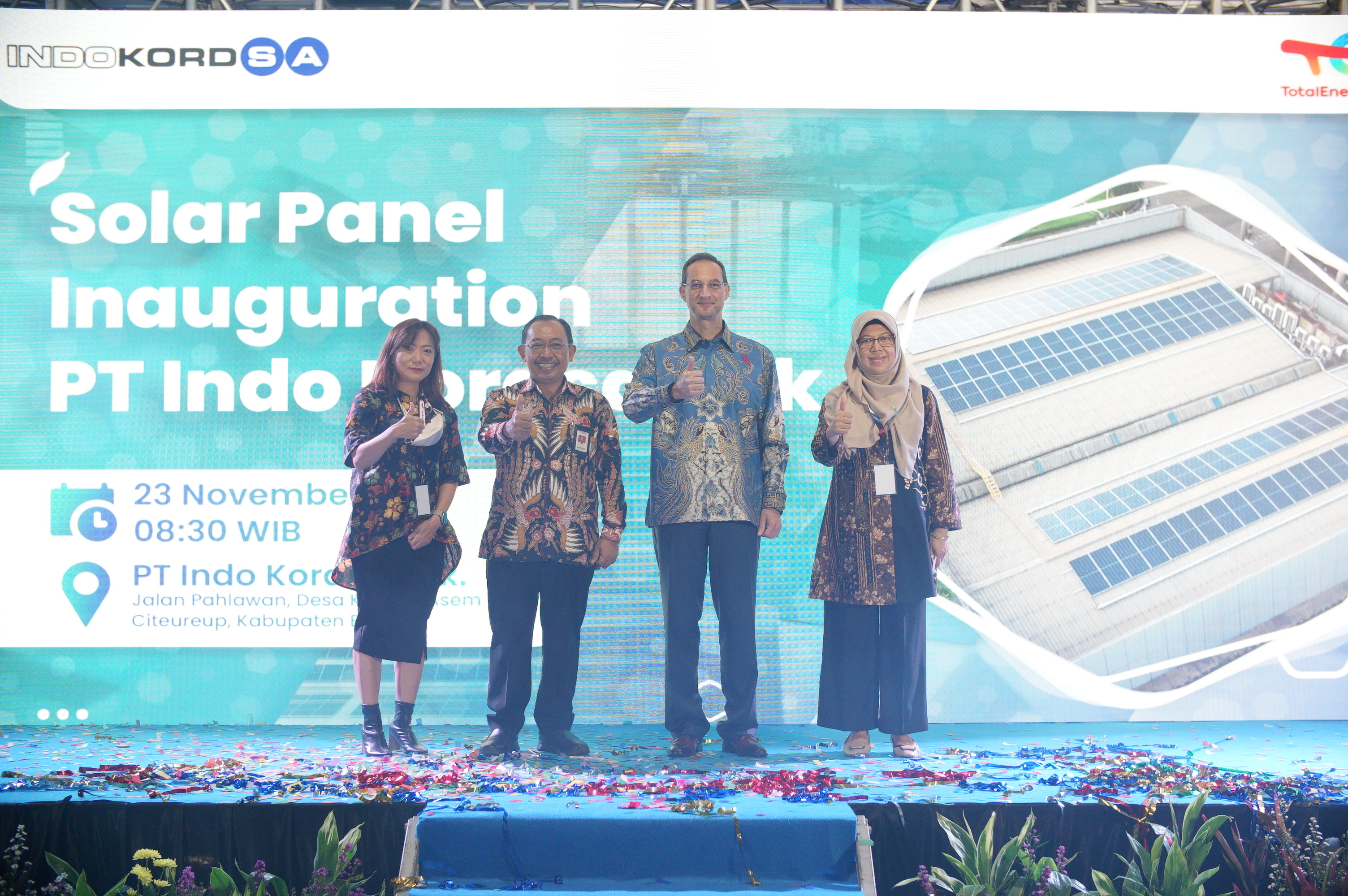 PT Indo Kordsa Tbk (Indo Kordsa) and TotalEnergies celebrated the official launch of the rooftop-mounted solar system for Indo Kordsa’s production, warehouse, and office buildings in Citeureup, Bogor, Indonesia, on Wednesday (23/11). Indo Kordsa, a subsidiary of Kordsa, is one of the first tire cord manufacturers in Southeast Asia to use solar power. The project is part of  Indo Kordsa’s Sustainability Roadmap Strategy to achieve its goal to reduce emission levels by 3% per year through the use of renewable energy.

Indo Kordsa, in accordance with Kordsa’s sustainability strategies, is committed to combat climate change. According to its commitment to the Science-Based Targets Initiative to help limit global warming to 1.5°C, Indo Kordsa aims to reach net-zero emissions by 2050. Together with TotalEnergies, especially known for their technical experience in deploying renewable energy solutions, Indo Kordsa supports its transition towards clean energy.

With over 8,800 modules installed onto the rooftops of the company’s 6 facilities, 4.8 megawatt-peak (MWp) PV system generates approximately 6,600 megawatt-hours (MWh) of renewable electricity annually, generates significant cost savings for Indo Kordsa and reduces the company’s carbon footprint by about 5,200 tons of CO2 emissions.

Ömür Menteş, Indo Kordsa President Director said, “This is the biggest among other Kordsa projects throughout 6 countries and the biggest in Bogor District. PT Indo Kordsa Tbk also became the second technical textiles company in Indonesia to utilize the solar rooftop.”

Gavin Adda, Head of TotalEnergies Renewables Distributed Generation Asia said, “Congratulations to both the Indo Kordsa and TotalEnergies teams on the successful launch of the system. TotalEnergies provides its customers peace of mind from a technical, financial, and commercial perspective. We are delighted to support Indo Kordsa on its sustainability journey towards reducing their carbon footprint and cost-saving goals.” 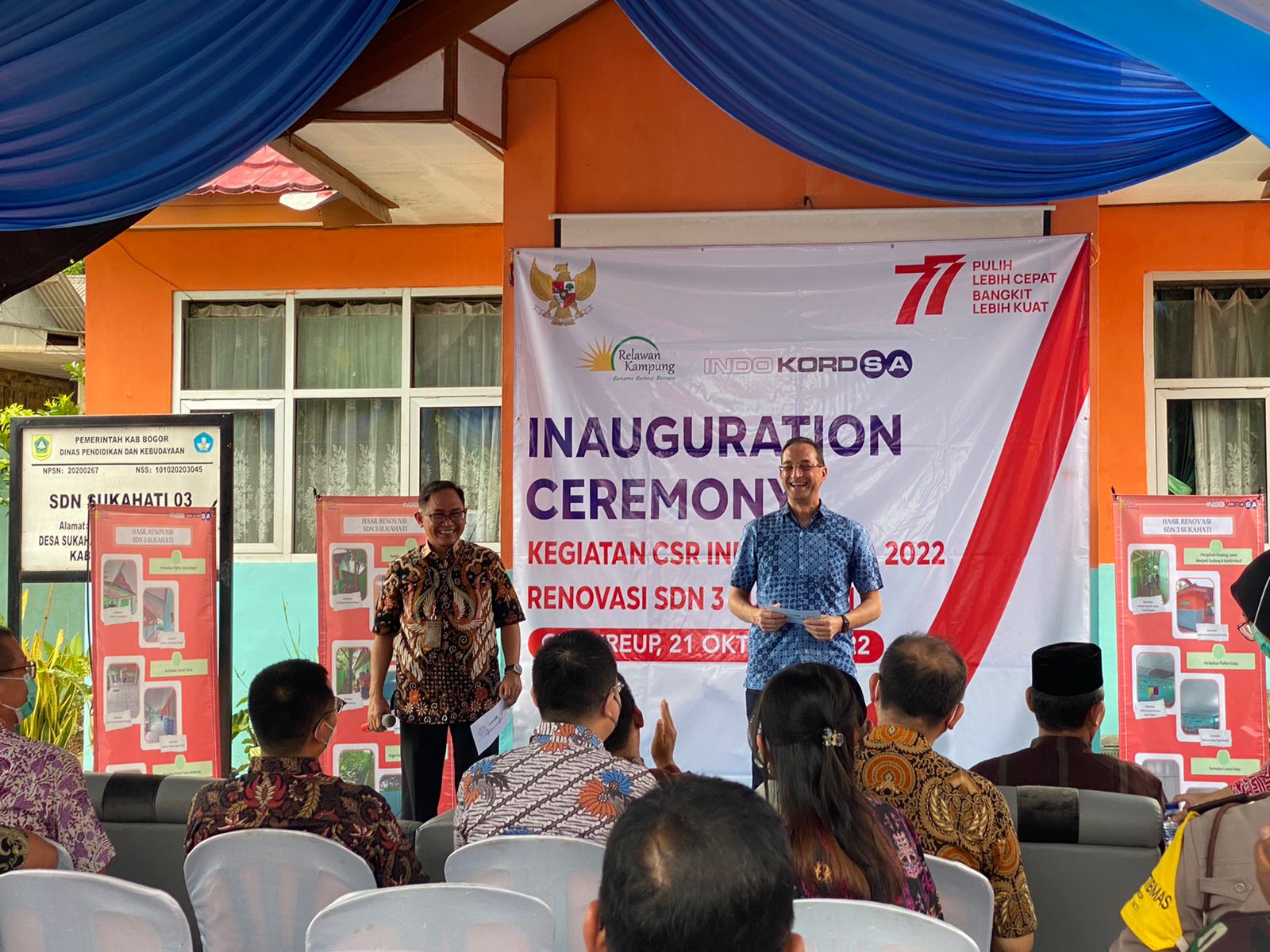 On Friday (21/10) located at SDN 3 Sukahati, PT Indo Kordsa Tbk held an inaguration for the compleation of renovation of SDN 3 Sukahati school building as one of Indokordsa’s CSR program. Indo Kordsa built additional rooms and donated electronic devices to support the school facilities. The inauguration was opened by the signing on the stone by the President Director of Indo Kordsa, Mr. Omur Mentes, and accompanied by Mr. Wahyu Yuniarto as Director of the company.

"We are passionate about education, in addition to education becoming one of our main focuses in developing Indo Kordsa’s Corporate Social Responsibility program every year", said Mr. Omur Mentes, President Director of PT Indo Kordsa Tbk.

Indo Kordsa in collaboration with the Relawan Kampung Indonesia Foundation started the school renovation activity by observing the needs of the school’s facilities, further on then determined the right target for development. Renovation was made to the schools main building, Library Room, Computer Laboratory, Boundary Wall, ceilings, floors, as well as the school canteen. It does not stop there, several facilities are also provided by Indo Kordsa, such as laptops, trash cans, and shoe racks which are recycled from the rest of the company's production activities.

"Hopefully our contribution to the environment will not stop here and will not only rely on us, but it can be contagious to many parties", concluded Bapak Omur Mentes. 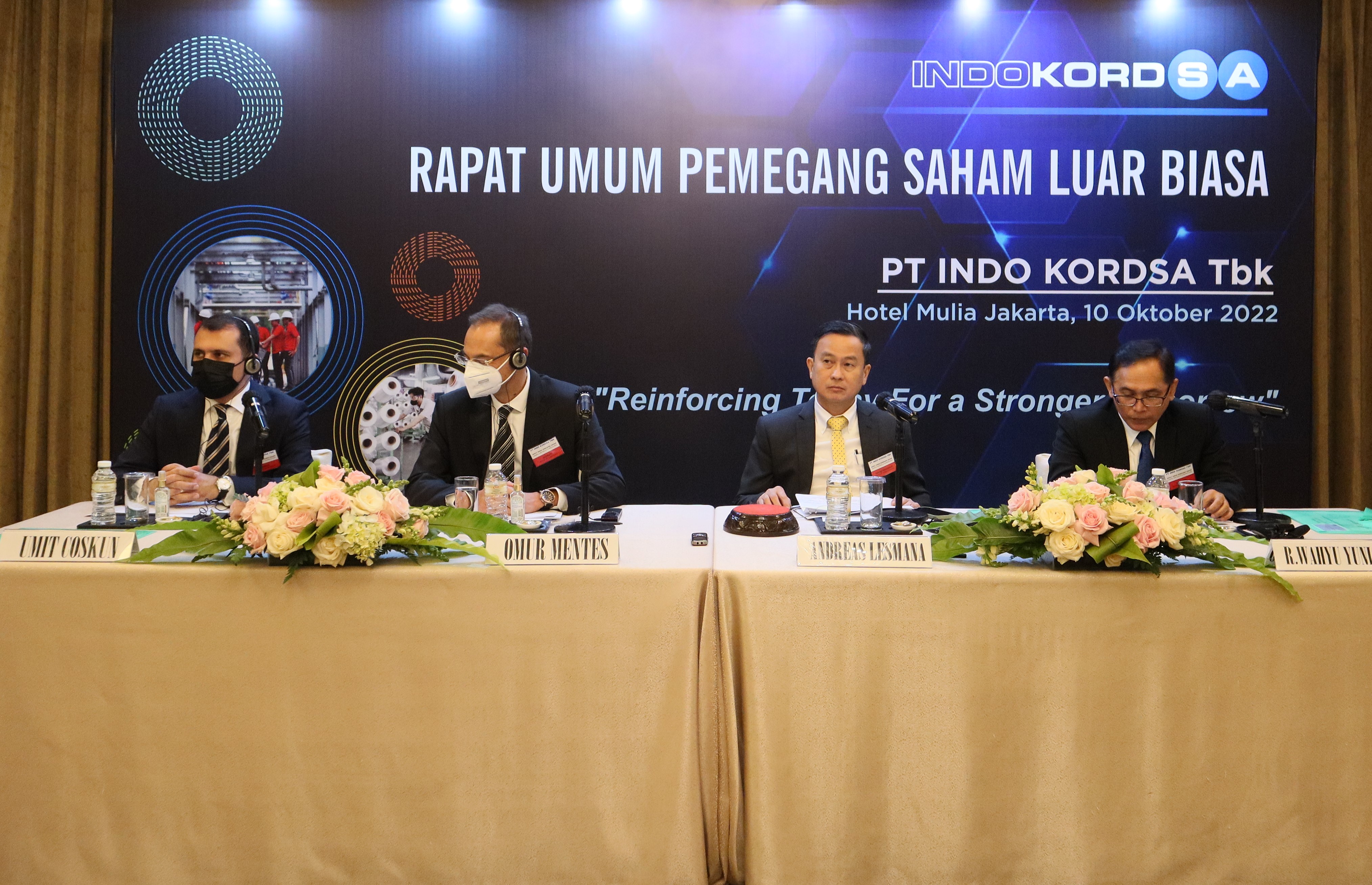 On Monday, 10h October 2022, PT Indo Kordsa Tbk (the “Company”) has successfully held an Extraordinary General Meeting of Shareholders, in Mulia Hotel, Jakarta, Indonesia. The meeting was held both via online and offline. 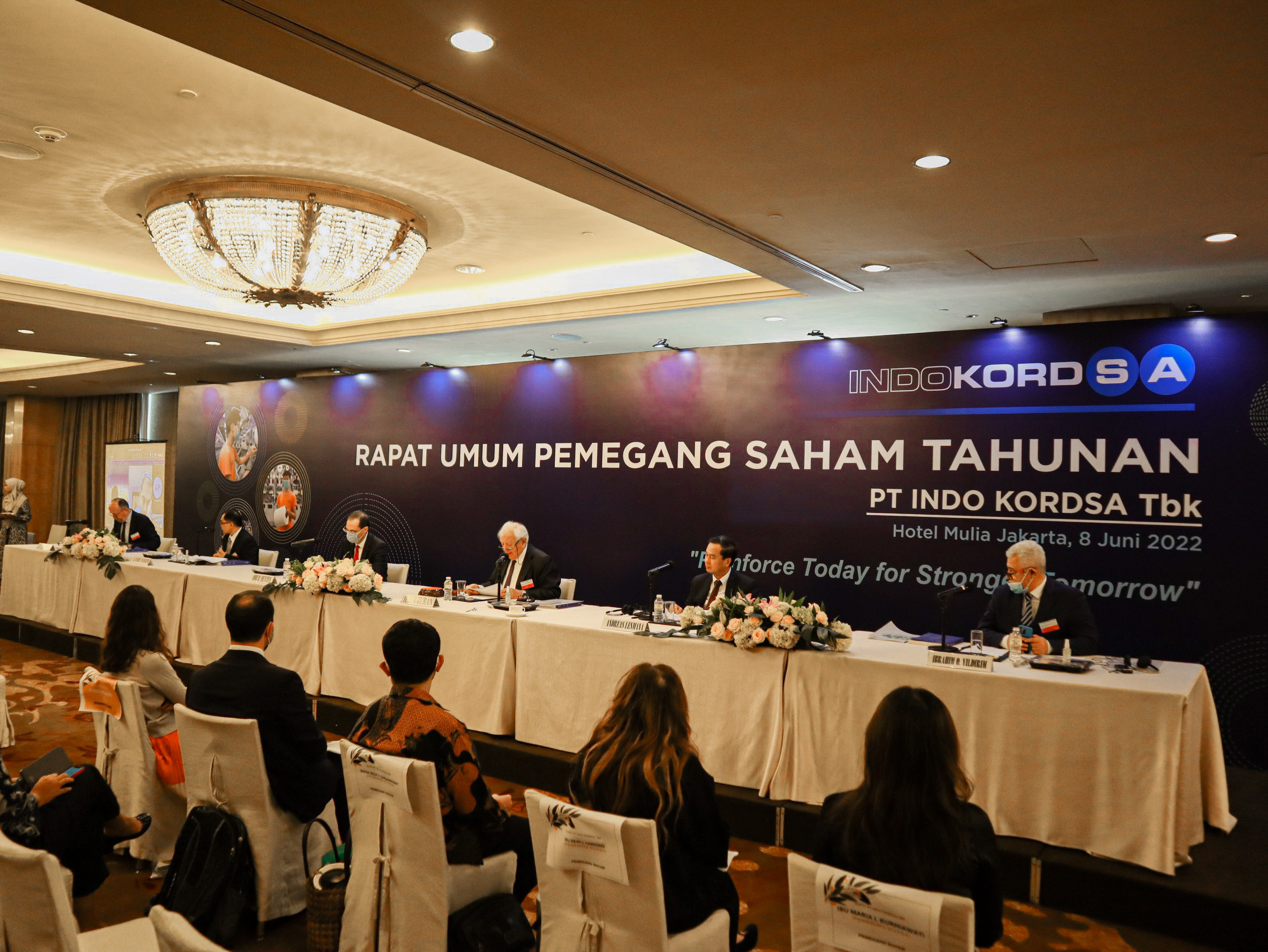 On Wednesday, 8th June 2022, PT Indo Kordsa Tbk (the “Company”) has successfully held a series of events in one day, in Mulia Hotel, Jakarta, Indonesia. The meeting was held both via online and offline.

All 5 annual agendas of the Meeting were approved by the attendees. This meeting officially appointed Mr. Ibrahim Ozgur Yildirm as the new President Commissioner of the and Mr. Omur Mentes as the President Director also Mr. Umit Coskun as the new member of the Board of Directors of the Company.

The second and last event of the day was the Public Expose that was conducted right after the AGMS. This Public Expose was held as a form of the Company's responsibility in providing information transparently to shareholders and stakeholders.

Indo Kordsa Certified as a Great Place To Work in 2022 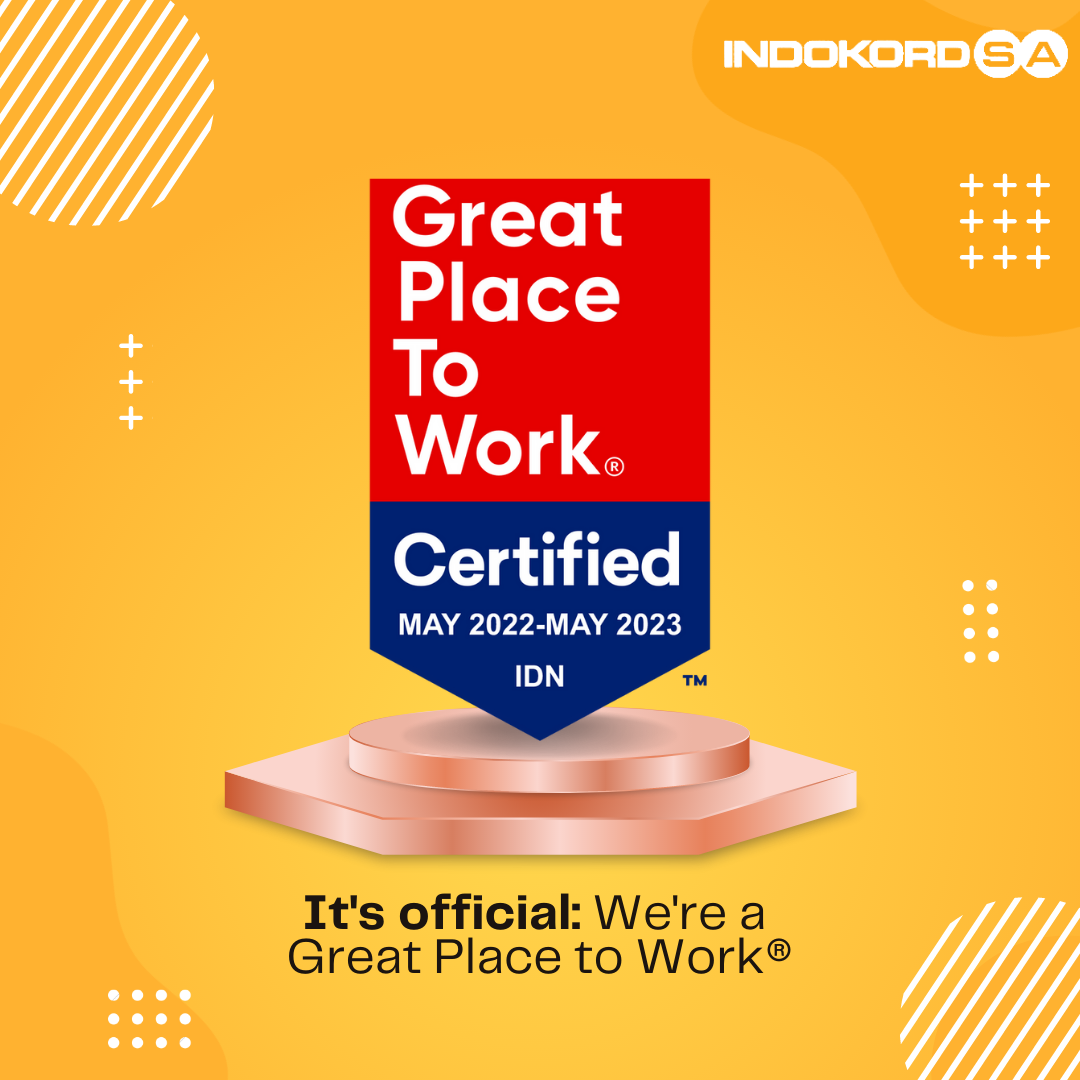 Indo Kordsa is officially certified as a Great Place to Work! To qualify, 91% of Indo Kordsa employees responded to 60+ survey questions to anonymously rate the organization, and 88% of the employees say Indo Kordsa is a great place to work! This certification is bracing Indo Kordsa to commit to providing the best working experience and pleasant working environment. Indo Kordsa believes that implementing an equal, diverse and inclusive culture of work will enable its employee's highest potential and development.